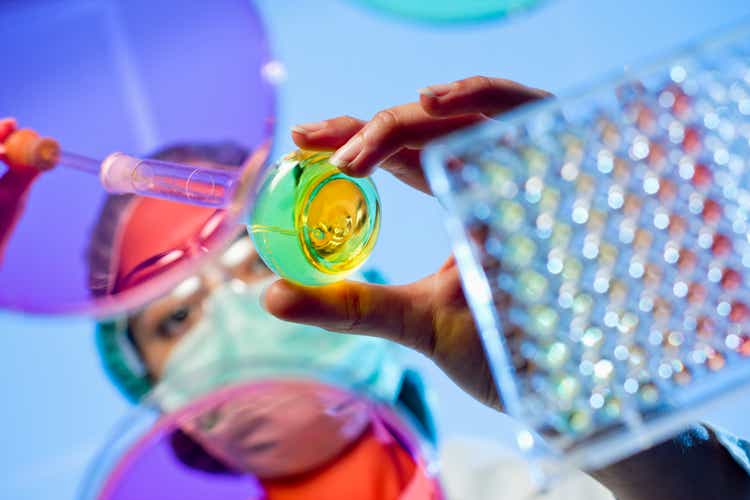 ProPhase Labs, Inc. (NASDAQ:PRPH) is a small-cap biotech stock with a market capitalization of just $174.74 million. Over the past year, the stock price has increased by 114.03%. The company has exceeded earnings expectations for the past three consecutive quarters.

PRPH is a long-standing biotechnology company; which underwent a complete corporate strategic overhaul at the end of 2009. Over the past three years, compound annual revenue has increased by 132.07%. The company has outperformed the market to date and the stock price is currently well below the one-year target of $15. I believe there is much more upside potential for this cheap biotech company with strong fundamentals. It has increased its performance in terms of turnover and earnings year on year, increased its working capital, paid special dividends and made strategic acquisitions for continued growth opportunities. Given that this stock is cheap, undervalued, and performing well, I think investors may want to take a bullish stance on this company.

PRPH was established in 1989 and was originally called The Quigley Corp., after its founder, former CEO and Chairman Guy J. Quigley. It went public in 1991 and was best known for its cold remedy, the over-the-counter product Cold-Eeze, which was created in 1992 and has since been sold to Mylan Pharma. In 2001, Quigley Pharma Inc. was formed to focus on R&D for other drug development programs. After a tough proxy battle in 2009, the founder stepped down and Ted Karkus has been CEO ever since. After 2009, PRPH underwent a complete strategic overhaul that propelled this biotechnology company into the growth phase that we continue to see today. The change included a completely new corporate identity, from a focus of research to a new logo, new packaging and a complete change in the board of directors at the time.

Until the end of 2014, PRPH had significantly high litigation costs relating to litigation related to the founder and his family and the restructuring of the firm and its objectives. Today, PRPH is involved in various activities focused on genomics, biotechnology and diagnostics, including R&D, distribution, sales and marketing of consumer health products and dietary supplements. It also supported COVID-19 testing and other diagnostic processes, including cancer research.

Increasing shareholder value is a critical business objective. To give you a small indication of the positive impact of change on growth, long-term shareholders have seen returns of 782.64% over the past five years.

PRPH is in the growth phase of its business model, but it is already showing profitability. The company has increased its numbers year over year, increased its working capital, paid dividends and made strategic acquisitions to increase its market share. In the chart below, we can see the incremental revenue growth over the past few years. The second quarter of 2022 recorded net revenue of $29.1 million, an increase of 218% year-on-year.

In the graph below, we can see the normalized net income by quarter. Second and third quarter results are generally weaker due to the seasonality of over-the-counter products sold more frequently outside of the summer months. Net income for the second quarter of 2022 hit a record $7.4 million, a 633% year-over-year increase.

The company has a strong net working capital of $53.53 million, cash and cash equivalents and marketable securities of $27.5 million. Its working capital is sufficient for new growth opportunities in addition to its $6 million stock buyback program. Additionally, the company also paid cash dividends of $0.30 per share last quarter. In 2021, it completed its largest acquisition, Nebula Genomics, for $15 million.

If we look at PRPH against the average performance of the pharmaceutical and healthcare industry, looking at Seeking Alpha’s Quant Rating, we can see that the company looks very promising and undervalued relative to its financials. It has a price/earnings ratio of 7.81. The industry average is more than double.

The business has a seasonal rate of return. Historically, the third quarter is the company’s weakest quarter in terms of performance. Products and even COVID-19 testing are seasonal depending on the weather, and fewer people get cold in the summer months. Additionally, COVID-19 testing depends on school regulations and procedures regarding the number of people who may be tested. It is said that this could increase with fewer people wearing masks in public spaces.

In the medical field, companies can benefit from certain funds and incentives. However, these can also be put on hold or terminated, which has an immediate impact on business performance. HRSA funded 70% of PRPH’s business to give uninsured clients the opportunity to get tested. The government did not have sufficient funds to continue the program, which immediately impacted HPRP’s revenue potential.

In addition, the company carries a certain amount of debt which could become a problem if it cannot raise enough capital to pay off its obligations quickly. PRPH has $16.7 million in debt due in the next twelve months and an additional $13.1 million in the next commitment period. He has more liquid assets than his total liabilities, but you have to be careful.

One of the critical issues with this stock is that it doesn’t hold much appeal to investors. It has rewarded its long-term investors with impressive returns. After reviewing ProPhase’s financials and valuation against its industry, the company is undervalued and there appears to be remarkable upside potential going forward, especially with respect to the latest acquisition. The company is diversifying its testing laboratories, which will further contribute to its research and development programs in the future. For this reason, I think investors may want to take a bullish stance on this cheap and small stock.