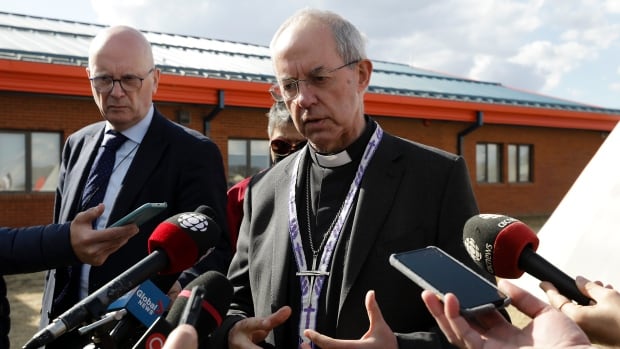 Will the Archbishop of Canterbury’s apology for the boarding school include any of the Church of England’s $13 billion in assets?

Archbishop of Canterbury says his apology for the ‘terrible crime’ the Anglican Church allowed into boarding schools will be followed by action – but it’s unclear whether that will include any of the estimated £13billion assets of Canadian dollars from the Church of England.

“I’m not running it. I can’t just go home and write a check,” Reverend Justin Welby told reporters on Saturday after hearing moving stories from survivors of the James Smith Cree Nation, 200 kilometers away. northeast of Saskatoon. Welby is the religious head of the Church of England, but its head is the British monarch.

On Saturday afternoon, Welby apologized for the church allowing and turning a blind eye to “hell” for so many Indigenous children for over a century. He promised to act.

Archbishop of Canterbury Justin Welby has apologized for the church’s role in ‘turning a blind eye’ to abuses suffered by survivors of Canada’s residential school system during his visit to James Smith’s Cree Nation in Saskatchewan . 2:54

Welby hears from other survivors on Sunday

Welby spent Sunday in Prince Albert, Sask. hold mass and then hear from other survivors. A small group of about 20 survivors were able to attend. Some said they heard informally at the last second from Facebook friends.

Survivor Samuel Hardlotte de La Ronge said hundreds of survivors from Anglican schools across Saskatchewan or other parts of Canada would have attended had they been given proper notice. He said many of them have waited years to hear an apology and demand action from the top official.

“It doesn’t feel good. We are always the last to hear about these things. A lot of things have happened to us and we wanted to share it. A lot of people at home didn’t know until it’s too late today,” Hardlotte said.

Those who shared from the podium on Sunday recounted details of rampant abuse and deprivation.

“We were taught for years that we were children of the devil. I was ashamed. I walked with my head down. I lost my tongue. For years I was terrified of white people. Terrified,” said an elderly woman.

George Merasty, a survivor who also works to support survivors through the Prince Albert Grand Council, said when he heard the apology he thought of all his friends who died before he could hear them.

Merasty hopes Welby will offer support “to those still dealing with this trauma, as well as young people. I feel for them. We need money to heal. We lose so many because of residential schools.

Former leader of the Federation of Sovereign Indigenous Nations, Sol Sanderson, told Welby that if the Anglican Church cares about justice and equality, it must now follow the leadership of First Nations people.

“This apology doesn’t go far enough… We have inherent rights, inherent sovereignty. So our duty, if we want to make changes, is to define them through our own customs, our own languages,” said Sanderson.

The issue of compensation

This week, Saskatoon Cree lawyer and former general counsel for the Truth and Reconciliation Commission, Donald Worme, said his research with the commission indicated that the total assets of the Church of England amounted to at least 13 billion Canadian dollars. This includes over 42,000 hectares of property in Britain alone, much of it in London’s most expensive areas.

Worme and the survivors say the compensation may have been legal, but it was paltry and wrong, given the devastation inflicted on the 150,000 survivors and their descendants. The Anglican Church operated approximately three dozen residential schools in Canada and over 150 Indian day schools.

Welby called the compensation a “significant contribution” because the Canadian branch of the Church is not wealthy.

Welby said Worme’s $13 billion estimate was “not entirely accurate”, but later admitted that the amount of wealth controlled by Church Commissioners was “around that”.

Hope to act in the coming months

Welby said much of it has to do with pension funds, legal requirements and around 15,000 trust accounts “which also makes life a bit difficult”.

He said they hoped to take action in the coming months on commemoration and other educational matters, but talking about any compensation “is going to take longer because the legal complications are indescribable”.

Welby also said survivors in Canada are not the only consideration: he noted that the Anglican Church and other religious institutions have harmed indigenous communities in the Caribbean, Australia and elsewhere.

He said there were also 3.6 million families in the UK who received food aid from churches.

Welby said he would like to work with the survivors before deciding on any further action.

“Certainly we can learn to work with people and not do things to them,” he said.

When asked for a timeline for his action plan, Welby said the COVID-19 pandemic has taught him not to set deadlines. But he said he hopes to have something about general education and recognition by August.

Welby agreed with the TRC’s characterization of the school system as “cultural genocide”.

“I can understand why many survivors would feel like this was real genocide,” he said.

Welby is expected to travel to Toronto next for an event on Monday.

Survivor Tom Roberts said the apology was emotional, but he intends to hold Welby to his promise of action. For Roberts, that must include financial assistance for healing centers and other supports. And he said it had to happen immediately because the number of survivors is rapidly dwindling.

Third-generation residential school survivor Rhonda Sanderson says she accepts the apology she witnessed Saturday from Welby, but she also heard one broken promise after another from every church and of the government.

“Today was a monumental day. Hearing those words had a huge impact on me,” she said. “Put your words into action. Don’t just say it and do nothing. It would be frustrating.”

Support is available for anyone affected by the lingering effects of residential schools and those triggered by the latest reports. A National Residential School Crisis Line has been established to provide support to residential school survivors and others affected. People can access emotional and crisis referral services by calling the 24-hour national crisis hotline: 1-866-925-4419.